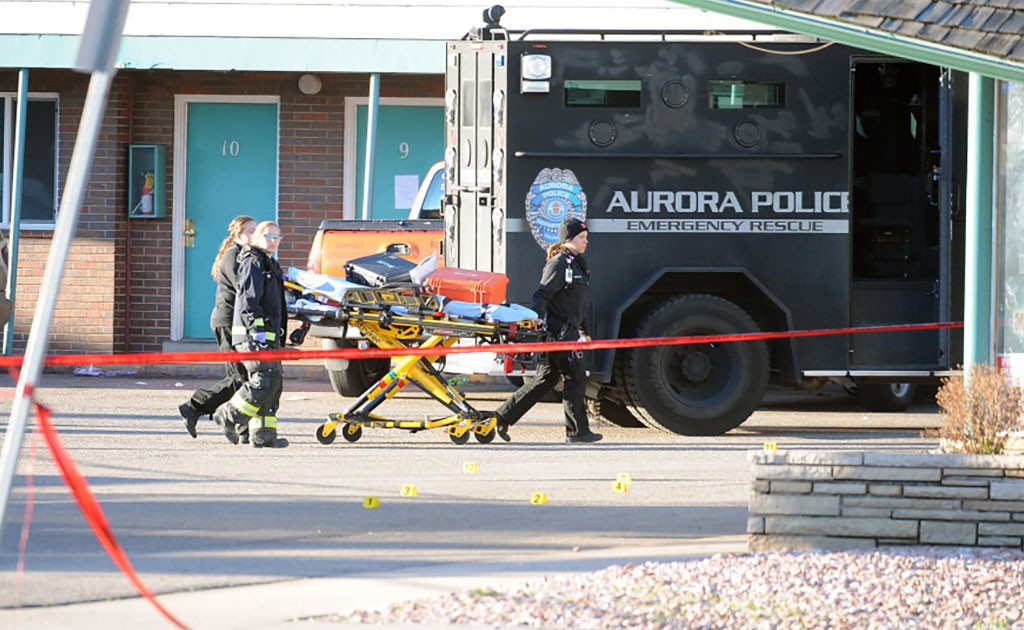 A motel in Aurora Colorado became a crime scene on Thursday. Police arrived at the establishment and discovered a man in the parking lot with a gunshot wound. The incident occurred at the Riviera Motel in Aurora.

The shooting occurred at 1 a.m. at the Riviera Motel at 9100 E. Colfax Ave., police said. The victim was pronounced dead after being rushed to a local hospital. Upon investigating that incident, police were tipped off that at the same location a robbery had occurred. At which point they discovered that the suspect had locked himself in one of the rooms.

The man who was robbed was taken away on stretcher. Due to the fact that the officers did not know if the two incidents were related, and also because of the fact a suspect had been holed up in one of the rooms, officers called in SWAT.

Police at some point had determined that there was no threat to the public. At that point police wound up in  a six-hour standoff with the suspect locked in the motel room. Upon gaining entry into the room sometime just before 7 a.m., the officers arrested both the man in the room and a female. The female had an outstanding warrant for her arrest.

The suspect taken away did however suffer minor injuries that occurred at some point during the standoff with police. It was not until later that police announced that the robbery report was unfounded and that it was being investigated as a separate assault case.

Sarah Fiscus, a residential manager at the Riviera Motel told reporters, “I am so shocked,” adding, “I’ve been here six years and nothing like this has happened. I’m so sorry about the person who was shot.”

Fiscus said she didn’t hear the gunshots because she turned up the volume on her TV after she rented the last of 47 rooms that are available on a daily, weekly and monthly basis. Fiscus was awoke by police at which point she saw the 11 police markers on the lot, laid out to identify possible evidence that may include bullet shells. She also saw several police cars with flashing lights and said red police tape encircled the motel.

Colfax street, where the motel is located was closed during the standoff and investigation. School at Boston Elementary School which is nearby, was delayed due to the police activity in the area.  School resumed at 10 a.m.

Aurora has a safety rating of 15/100 according to the website neighborhood scout. On average, there are about 12,239 violent and property crimes committed there., 1,1661 violent crimes and 10,239 property crimes.

This site uses Akismet to reduce spam. Learn how your comment data is processed.